Los Angeles, CA, May 23, 2009 --- Patricia Kennedy, founder of Step Up 4 Vets and the creator of The Peace One Earth Medallion, has been named the Veteran Organization Grand Marshal of the The 21st Annual Canoga Park Memorial Day Parade in Canoga Park, California. The Parade honors the fallen men and women of the Armed Forces from all of America’s armed conflicts, including the wars in Afghanistan and Iraq. Actress Stefanie Powers serves as celebrity Grand Marshal.

At the end of the parade, Ms. Kennedy will present a special Peace One Earth Medallion to Los Angeles Mayor Antonio Villaraigosa on behalf of his support of Veterans.

The event coincides with the one year anniversary of both Step Up 4 Vets and the unveiling of the Peace One Earth Medallion. “What an incredible year we’ve had. We’ve presented the Peace One Earth medallion to great American celebrities Wayne Newton, Stefanie Powers, Buzz Aldrin, Kate Linder, Hugh O’Brian, Gary Sinise, Ed Begley, Jr., Mike Vogel, Luc Robitaille and Rick Monday in recognition of their extraordinary commitment to our veterans; co sponsored the California Fitness Challenge - Road 2 Recovery five day cycling event, donated Spinning Bikes to wounded Vets; and met with countless Veterans and non-profit groups to help support our returning troops. We’re still just getting our feet wet, but I think we’ve already started to make a difference in the lives of many veterans and their families,” Ms. Kennedy said today. “We encourage people to support Step Up 4 Vets by purchasing a Peace One Earth Medallion for themselves, a loved one, or a friend as a way to express appreciation and honor our Veterans.”

A portion of the proceeds from the Peace One Earth medallions is used to support Step Up 4 Vets, a nonprofit organization whose mission is to partner in the transition of our returning veterans as they readjust, redirect and rebuild their civilian lives. Further information is available at www.stepup4vets.org

Patricia Kennedy established Peace One Earth as a way to express gratitude to the defenders of our freedoms while acknowledging the hope for a world at peace. Renowned for her exquisite jewelry collection, Ms. Kennedy set about creating the beautifully crafted Peace One Earth medallion to make a statement about what is really important and essential in a peaceful society and to acknowledge the service and sacrifice of those who have given so much in pursuit.

The Peace One Earth medallion, offered as both a pendant and a lapel pin, is available in 18 Karat Yellow Gold, Solid Sterling Silver, Gold-Plate and Silver-Plate. The pendant is suspended from a 22 inch red cord finished with a lobster claw clasp and the lapel pin is designed with a single post and fastener. The medallion comes in its own Peace One Earth gold-stamped suede pouch. Further information is available at www.peaceoneearth.com
Posted by Meredy at 5/23/2009 01:17:00 PM No comments:

Children and the Arts

Singer and actress Carol Channing addressed the California State PTA Convention in San Jose on May 2 and made an appeal to bring the arts back to schools. Channing and her husband, Harry Kulijian, produced a DVD for distribution on which a few of their friends, including JoAnne Worley, Lily Tomlin, Phill Lewis, Florence Henderson, Stefanie Powers and Kevin Sorbo talk about how important it is for children to be exposed to the arts.
Posted by Meredy at 5/16/2009 12:07:00 AM No comments:

One from the Hart

Actress Stefanie Powers' ONE FROM THE HART, with NYT bestselling author Richard Buskin, covering the author's career that commenced during the last days of the star-studded studio system; her extensive, ongoing involvement with the William Holden Wildlife Foundation, etc.
Posted by Meredy at 5/11/2009 04:34:00 PM No comments: 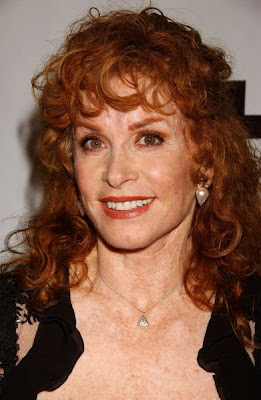 Following the recent withdrawal of actor Lorenzo Lamas selected by the Los Angeles shooting a film important for his career, the organizers of the Festival de Mirande Country, which runs from July 9 to 14, had to change their tactics with regard to sponsorship.

It will be entrusted to a woman because it is the actress Stefanie Powers, which will be celebrating.

Also known worldwide, of great beauty and speaking our language, Stephanie Powers has more than 200 film roles, including the partner was of John Wayne in "Mac Lintock" by Lee Van Cleef in "The Ride of 7 mercenaries "and Roger Moore in" Escape to Antena.

It was also the unforgettable Jennifer Hart in "L'amour du risque" alongside Robert Wagner. Lady of the heart, the sponsor of this 17th edition of Country Mirande, is president of its foundation, the William Holden Wildlife Foundation, charitable organization dedicated to the preservation of wildlife in Kenya it has helped to build and sustain.
Posted by Meredy at 5/05/2009 07:51:00 PM No comments: