Thank you, Rex Welton of the Forsyth Humane Society located in Winston-Salem, NC.

The 4th Annual "Furr" Ball was held at the historic Graylyn Manor House on Saturday, October 20th, 2007. This elegant, black tie celebration was a spectacular combination of delicious food, drink, shopping, music and dancing. It was a time for animal lovers to come together and make a real difference.
Posted by Meredy at 10/24/2007 07:18:00 PM No comments:

On Thursday, October 11, 2007 over 300 people crowded into the Crystal Ballroom of the Beverly Hills Hotel to celebrate the successes of The Discovery Eye Foundation over the past thirty-seven years and also to recognize some incredible people committed to the field of vision research and treatment. Ms. Beverly Gelfand and Ms. Sue Marshall were the co-chairs of this evening, entitled “A Night for Discovery”.

Founded in 1970, by Morris and Rita Pynoos, the Discovery Eye Foundation (DEF) is dedicated to finding cures and treatments for corneal and retinal eye diseases while providing exceptional patient education through two outstanding outreach programs – Macular Degeneration Partnership and National Keratoconus Foundation. DEF has program and administrative offices in West Hollywood and has clinical research facilities in collaboration with the University of California at Irvine. DEF funded researchers are currently supporting research into treatment and cures for diabetic retinopathy, age-related macular degeneration, ocular herpes, and keratoconus.

Entertainment during the evening was provided by Mr. Tom Sullivan and Ms. Stefanie Powers.

Ms. Powers began her career at age 15, dancing for Jerome Robbins. Under contract to Columbia Pictures, she appeared in 15 films, among them Experiment in Terror, The Interns, and McClintock! After her first television series, “The Girl From U.N.C.L.E.”, came 12 more films, over 20 mini-series stage productions and the long-running “Hart to Hart.” She is co-founder of the William Holden Wildlife Foundation, established in 1982 as a public charity, is a Fellow of the Los Angeles Zoo, Royal Geographical Society and Explorers Club of America, and she created the Jaguar Conservation Trust for Jaguar Cars North America. Powers will bring her new one-woman show, One from the Hart, to the Orange County Performing Arts Center in November.
Posted by Meredy at 10/22/2007 11:45:00 PM No comments:

Robert Wagner and Stefanie Powers are going to be in Winston-Salem, NC this Saturday.

Get happy with haute handbags

ALL ABOUT THE HANDBAGS

Claxton + Moffitt Go Another Lap Around the Sun

The height of chic remains lensman William Claxton and muse Peggy Moffitt, who marked their 80th and 70th birthdays, respectively, with a jazzy celebration this weekend hosted by Benedict and Lauren Taschen, completely filling Dominick’s in West L.A.

With pals Burt Bacharach and vintage guru Cameron Silver, art pioneer Irving Blum and Phoenix Art Museum curator Denita Sewell, this was one swellegant entry for the books. Platters of oysters kicked off the family-style supper, and a jazz quartet kept the mood pulsing, inspiring a still foxy Stefanie Powers (that’s right, Mrs. Hart to Hart) to rise up and share a song.

Wed since 1960, and together two years before that, these two living icons unequivocally changed the way we all think of the birth of cool—from Bill’s indelible photographs of jazz greats Charlie Parker, Duke Ellington, Billy Holiday, Dizzy Gillespie and many others, to Peggy’s signature kabuki-styled makeup and severe Vidal Sassoon hair cuts which defined the 1960s look and still looks as fierce as ever.
Posted by Meredy at 10/15/2007 03:01:00 PM No comments:

Moore gets star on Walk of Fame 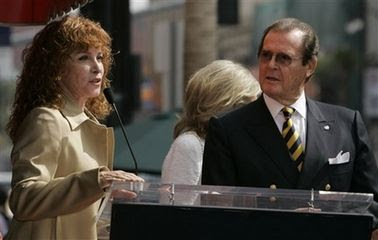 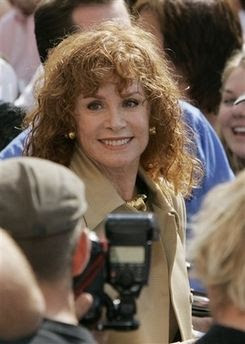 James Bond actor Sir Roger Moore has been honoured with a star on the Walk of Fame in Hollywood, Los Angeles.

The plaque is located in front of 7007 Hollywood Boulevard - a nod to the British veteran's most famous role.

"I've had a love affair with Hollywood for many, many years," said Sir Roger, who turns 80 this weekend.

The actor - who appeared in seven James Bond films in 12 years, beginning with Live and Let Die in 1973 - described unveiling his star as "a big thrill".

He was joined at the ceremony by his wife Kristina, daughter Deborah and sons Geoffrey and Christian.

Also present was actor Richard Kiel, who played Sir Roger's villainous nemesis Jaws in The Spy Who Loved Me and Moonraker.

"Sadly, I had to retire from the Bond films," he said. "The girls were getting younger, or I was just getting too old."

Sir Roger's is the 2,350th star to be unveiled on Hollywood Boulevard, according to the actor's website.

Born on 14 October 1927, he began his acting career as an extra in the 1940s before studying at the Royal Academy of Dramatic Arts.

His other famous roles include Ivanhoe, Simon Templar in The Saint and Lord Brett Sinclair in The Persuaders.

The Legendary Sir Roger Moore to be Honored at The Thalians 52nd Anniversary Gala On October 21, 2007 at the Beverly Hilton Hotel to Benefit The Thalians Mental Health Center at Cedars Sinai

Sir Roger Moore, considered by millions worldwide as the most elegant and debonair "James Bond," will be honored by The Thalians at their 52nd Anniversary Ball on Sunday evening, October 21 at the Beverly Hilton Hotel, it was announced by The Thalians founding members and ball co-chairs Debbie Reynolds and Ruta Lee.

The annual gala honors a legendary individual for their achievements and charitable contributions and raises funds to support the Thalians Mental Health Center at Cedars Sinai Hospital. This year, Moore will make a rare visit to the U.S. to accept this prestigious honor.

In keeping with the "James Bond" ambience of the evening, The Thalians will orchestrate a landmark reunion of some of the most celebrated "Bond Girls" and co-stars to fete Moore, including Maude Adams, Nancy Allen, Lois Chiles, Stefanie Powers, Gloria Hendry, Lynn Holly, Pam Shriver, Luciana Paluzzi, Serena Scott Thomas, Lana Wood, among others to be announced.

The special evening honoring Moore will also feature a live auction hosted by television's "Deal or No Deal" host Howie Mandell and the "Deal or No Deal" girls and a special guest performance by pop music legend Neil Sedaka.

Founded in 1955, The Thalians continues to raise over $500,000.00 annually to support The Thalians Mental Health Center at Cedars Sinai, considered one of the top and most respected mental health centers in the world. As the main support group for the Department of Psychiatry at Cedars Sinai, The Thalians has proven to be an outstanding facility performing clinical care for in and out-patients as well as cutting edge neuroscience research and medical advances in the areas of Alzheimer's disease, schizophrenia, depression, substance abuse, bi-polar disorders and autism.