Reviews of Hart of My Heart at The Hippodrome Casino

Stefanie Powers is currently performing her cabaret show Hart of My Heart - A Tribute to Lorenz Hart in the Matcham Room of The Hippodrome Casino in London.

Stefanie Powers - Live at The Hippodrome Casino in London

The songs of Rodgers and Hart are at the very core of the Great American Song Book and it is no surprise that Lorenz Hart's remarkable lyrics earned him the well-deserved right to be called "the Poet of Broadway." Stefanie Powers celebrates those lyrics in an evening of song and anecdotal stories that work to frame the music in a context that gives new meaning to those familiar songs. Hart of My Heart is an intimate tribute to a man whose tortured personal life was overshadowed by his legacy of words to music that ranks him among the greatest. This one-woman show earned New York critics acclaim when she performed it at Feinstein's at the Regency Hotel.

Stefanie began her career at age 15, dancing briefly for famed choreographer Jerome Robbins. While under contract to Columbia pictures she appeared in 15 motion pictures before landing her first television role in the The Girl from U.N.C.L.E. Later she played opposite Robert Wagner in the long running series Hart to Hart. Stefanie has also continued playing roles in musical theater in both the West End and on Broadway, including appearances in The King and I and Sunset Boulevard.

Robert Wagner and Stefanie Powers return after a successful series run as Jonathan and Jennifer Hart for four feature-length mysteries that will entertain and thrill you. See everyone's favorite crime-solving couple - along with their loyal butler Max (Lionel Stander) and their dog Freeway - in these four whodunits. In HART TO HART RETURNS the Harts deal with shady government contractors. In HART TO HART: HOME IS WHERE THE HART IS the two return to the town where Jennifer worked as a reporter to deal with her old mentor's mysterious death. In HART TO HART: CRIMES OF THE HART the Harts go to New York to see a play Jennifer wrote but find themselves investigating the murder of a stagehand - and Jonathan is a suspect! Finally in HART TO HART: OLD FRIENDS NEVER DIE the Harts attend a publisher's murder mystery party but begin to wonder if it is real. With stars such as Maureen O'Sullivan Roddy McDowall Richard Belzer Mike Farrell and Fred Willard these four HART TO HART movies are a must for any mystery lover's collection! Newly remastered.

Robert Wagner and Stefanie Powers reprise their beloved characters Jonathan and Jennifer Hart as they return to the small screen in these four feature-length mysteries. In HART TO HART: SECRETS OF THE HART Jonathan is told that he has a long-lost sister only to be led into a potential trap (this is also the last appearance by Lionel Stander as Max the Harts' beloved butler). In HART TO HART: TWO HARTS IN THREE-QUARTER TIME the Harts go to Montreal for the reading of Max's will but the gift being left to them leads to a tale of kidnapping and murder. In HART TO HART: HARTS IN HIGH SEASON the Harts go to Sydney Australia where there is more than meets the eye when an old flame of Jennifer's seems to have ulterior motives. And in HART TO HART: TILL DEATH DO US HART the Harts travel to Munich Germany for their anniversary and help a sick boy but run into trouble when they meet a woman who is the spitting image of Jennifer! With stars such as Marion Ross Jason Bateman James Brolin Joan Collins and George Hamilton these four HART TO HART movies are an exciting and star-filled collection! Newly remastered.

Buy movies individually by clicking on the links below:

Hart to Hart: Home is Where the Hart Is

Hart to Hart: Crimes of the Hart

Hart to Hart: Secrets of the Hart

Hart To Hart: Til Death Do Us Hart

Stefanie Powers on the struggles that have shaped her life

Stefanie Powers is a woman who relishes a challenge. She’s having to surmount the difficulties faced by a flaky mobile phone line as she speaks to me from a car being driven out of Worcester where she’s been signing copies of her autobiography One From The Hart.

As confessionals go it’s a stark overview of a life that has not been without its struggles in recent times for the actress who starred in last year’s I’m A Celebrity... Get Me Out Of Here!

“The book came out in hardback and we sold out, so it was decided to publish it in paperback version with the addition of the final chapter which was written after I was participated in your very popular television show in the jungle,” she explains.

“The book was more or less a cathartic experience for me after two life-changing events. One was the death of my mother with whom I was extremely close. We had shared a home for the past 27 years of her life. We had many adventures and travels together. We were great friends as well as being mother and daughter.

“That was followed by my own trial with and surgery for lung cancer,” she adds. “While recovering both physically and mentally from both of those events, I was asked to put some of that experience into a memoir form. I started writing and eventually it became a book.”

The 69-year-old star famed for her TV series Hart To Hart, in which she starred alongside Robert Wager as a crime-fighting husband and wife, tells me she had her own deeply personal reasons for adding a touch of Hollywood glamour to I’m A Celebrity.

“I guess the last piece of the puzzle was when I had fully recovered physically from my surgery,” she reveals. “I had lived all of my life out of doors, on expeditions and adventure travel. I’ve filmed documentaries in different places and in uncomfortable situations. I have spent a long time sleeping under the stars and continue to do so and enjoy it very much.

“So the idea of going into a jungle environment and doing some trials, well it was an opportunity to earn some money for the William Holden Wildlife Foundation (the late Hollywood actor’s organisation of which Powers is a patron) and create some additional visibility for it.

“I also wanted to be a poster child for survivors or people who are in the process of surviving cancer, as I am. I wanted to show that it is possible to resume all of your activities after beating cancer.”

Although one of the first to be voted off the show. Powers is resolute that she achieved all of her aims.

“I think I very quickly accomplished everything I wanted to,” she states. “It was as demanding as some of my personal experiences have been, especially those physical challenges, so I was quite happy to have done it and gotten out of that environment as quickly as possible.”

Ask the woman who has intimate knowledge of the Hollywood star system – having been signed up by Universal Studios in her younger days – about the cult of celebrity and you are met with a stinging response. It’s clear she’s certainly no fan of reality TV despite her jungle exploits.

“When I see something like the Kardashians (US reality TV stars) who are very attractive girls promoted by their mother into a multi-million business and I think about Kim Kardashian being paid $15m so that they could photograph her wedding, and then I contrast that with raising money for breast cancer or research for deadly diseases, if you tried to raise $15m for research into deadly diseases it would take you quite a lot of time to do that.

“So I think by comparison the amount of money that is generated by this cult of celebrity over nothing whatsoever is almost an obscenity. When compared to worthwhile and terribly important causes and tragedies the world is experiencing, I find it not only frivolous but tragic. It’s so out of proportion with anything meaningful.”

It’s apparent Powers won’t be setting foot in the world of reality TV anytime soon. Nevertheless she is back in the limelight and treading the boards for British audiences in a national tour of On Golden Pond.

“It’s a wonderful play and a play on which the Oscar-winning movie is based,” she elaborates. “The movie was quite an event because not only was it beautifully made but it was a major event in movie history because it was Jane Fonda’s and Henry Fonda’s first and only appearance together in a film. It also won an academy award for both Katherine Hepburn and Henry Fonda. It was very much of a sentimental, emotional piece as a film,” she continues. But the play is very much a comedy. Our audiences are extremely delighted and surprised by how enjoyable the play is, because if they see the film they are pre-programmed to consider it as a tear-jerker and it’s far from that. We’re bringing it back in its original form and so far it’s been very well received.”
Posted by Meredy at 2/11/2012 02:08:00 PM No comments:

Photos of Stefanie Powers in On Golden Pond

Review: On Golden Pond by Ernest Thompson at Colchester Mercury until Saturday 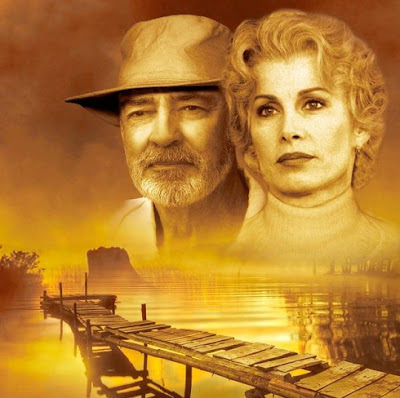 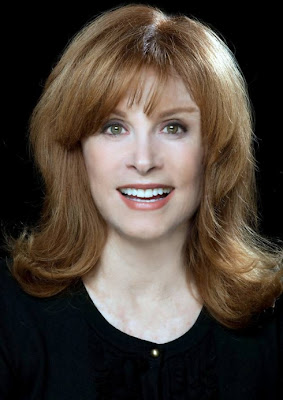 Norman and Ethel Thayer have spent the last 48 summers of their lives at their holiday home by the lake known as Golden Pond in the New England State of Maine. They’ve never wanted to go anywhere else, like abroad.

Not very adventurous for a noted professor emeritus of English you might think, very old-fashioned, but this is an old-fashioned play and a complete delight, relying entirely on the wit of the words and the ability of the cast to tell what amounts to a very simple story.

It is also something of an occasion because a big star of films and TV, Stefanie Powers, has the role of Ethel and she’s very good indeed. But Norman is the mainspring of the piece and Richard Johnson has got him completely nailed, a curmudgeon and stirrer of the first order who knowingly misunderstands and misleads. And he’s got some cracking lines in a script that bubbles and sometimes crackles with good humour.

Norman is a man who thinks he is getting his own way in all things but Ethel manages him without his really knowing it and they seem set for another summer of fishing, berry-picking and a quiet celebration of Norman’s 80th birthday when Chelsea, their daughter and only child, arrives with her new boyfriend Bill and his 14-year-old son Billy.

Chelsea and her dad have not been close for a long time and she is anxious to heal what is wrong between them. But first she and Bill are off to Europe to have some time together and they want to leave Billy with Norman and Ethel.

Norman’s not very keen but agrees and eventually his relationship with the youngster becomes good and important. “Billy’s been the best thing that’s happened for Norman since Roosevelt,” says Ethel. We perhaps wonder if it wasn’t a boy that he had really always wanted and this sparks new resentments when Chelsea returns. But it’s never too heavy and the laughs keep coming.

Stefanie Powers is a gentle Ethel who plays Norman a bit like the fish he’s so fond of catching in what is a very assured performance and she has some great lines of her own. Elizabeth Carling is a winning worried Chelsea, Tom Roberts does a nice job as Bill trying to create a good impression and Graeme Dalling is the boy who amusingly teaches Norman the cool language of youth.